Littlestown minister known for his energy


The Rev. James A. Martin was known for his walking in Littlestown. He would walk down King and Queen streets, sometimes several times a day, and stop to talk to shopkeepers and whomever he met along the way. "He would spend time talking to people about where they are in life and their faith, even outside of the Sheetz convenience store," said John Vogel, a former president at Redeemer's United Church of Christ in Littlestown, Martin's last pastorate.

"He had the courage to carry his Bible sometimes and pray as he was walking," Vogel said. "Some thought it strange, some thought it inspirational."

The walks were a way for Martin to use his excess energy, as he was a very high-energy person, Vogel said.

"He did it until he couldn't bear it anymore," Vogel said.

Martin, 60, of Littlestown, lost his battle with cancer on Christmas Eve morning. Martin was bgrn in Bronx, N.Y., and graduated from Beloit College in Wisconsin. After graduating, he entered the U.S. Navy and served four years at the War College in Newport, R.I.

His work as a pastor carried him to Beacon Falls, Conn., and Staten Island, N.Y., after he earned his Masters of Divinity at Bangor Theological Seminary in 1978. At Redeemer's U.C.C. he spent about nine and a half years and planned to move on to another church before realizing his diagnosis made that impossible, said his wife, Meredith Martin.

Very good at office management, she said, her husband was often irreplaceable at work and held positions with many associations. He served as president of the Littlestown Ministerium and head of the Gettysburg Association of the United Church of Christ.

A prolific writer, Martin penned hundreds of Christian songs, poems and epigrams, writing his last epigram only a few days before his death. Meredith said she has a thick notebook of poems he wrote.

"I probably haven't found half of them. I'm sure he has some of them tucked away," she said.

Martin originally wrote the lyrics and music to his songs by himself, but met Edward Jerlin in Staten Island in 1993. The two collaborated and produced a CD. Jerlin currently has enough material for and is completing four additional discs of Martin's music, Meredith said.

Martin also enjoyed photography, was an avid reader of the New York Times and collected watches and clocks.

"He liked the beat of it, the ticking, like a heartbeat," Meredith said. "The big clocks in our house he wanted to be ringing and banging."

Martin would purchase good-quality wrist watches either used or at a good price. If he saw someone he knew wearing a watch he did not like, he would give that person one of his watches, Meredith said.

"He was very outgoing, compassionate, a person who cared about other people - all kinds of people, not just the members of his church," Vogel said.

"I'm hearing from people I never knew who are telling me about things he did for them," Meredith said. 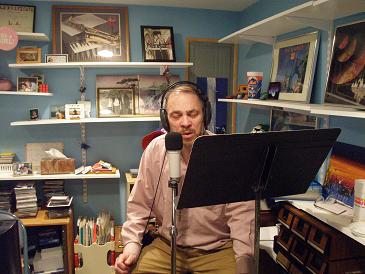 The Rev. James Martin wrote many songs and poems.
Here he records one of his songs at his home. (Submitted Photo)

© 2009 The Evening Sun. All rights reserved.
Reproduced with the permission of Media NewsGroup, Inc. by NewsBank, Inc.